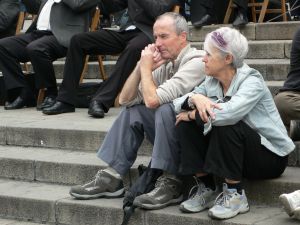 With the aging of families in San Antonio and throughout the country, an interesting trend seems to be happening. There are an increasing number of older couples calling it quits and opting for divorce. The numbers were already high and are continuing to accelerate with the baby boomer generation. This is an interesting phenomenon for a country that is already at the top of the list for divorce rates.

According to a research study conducted by Susan L. Brown and I-Fen Lin, the rate of divorce for couples over the age of 50 had doubled from 1990 to 2009. Half of those who divorced over the age of 50 were remarriages, according to the study and numbers were expected to escalate further. The same shocking increase was also true for those couples 65 and older. According to the research group, they predict that this increase in divorces among older couples will only get worse. One reason for their dire prediction is that the people who have already been married, divorced and remarried are two and one-half times more likely to divorce than couples still on their first marriage.

Attempting to find reasons for older couples deciding to call it quits is difficult. Many things can lead to divorce later in marriages. Once the children are educated, grown, gone and married with children, there is no longer that bond to remain married for the kids. Other reasons are the modern day general acceptance of divorce, financial independence, longer life expectancy, a desire for independence and wanting to find a more satisfying life, among other things.

Considering this documented trend, there are some safeguards that older couples considering divorce should take. By all means, each party needs to make sure they are financially protected and approach the distribution of assets with your head and not your heart.

It is important to obtain copies of all banking and investment statements, along with 401K or other retirement documentation so that there is a full disclosure of all assets of the marriage. It is also advisable to obtain a credit report to determine if there are debts unknown to one of the parties. Once the couple is separated and the division of assets commences, all joint accounts should be closed and individual accounts opened, as well as removing your name from credit and debt obligations.

Finally, new wills will need to be drafted and changes made to all life insurance policies, unless there is an agreement by one party to continue to have the other as beneficiary of his or her life insurance. In the event that there are future payments due a spouse, there should be long term disability or some other form of insurance taken out to ensure that those payments will be made.

Depending on the complexity of the divorce and the size of the marital assets to be distributed, it is possible that a proper distribution of assets and a property settlement agreement will not be possible without the assistance of experienced family law attorneys and a mediator. If you are over 50 and considering a divorce, it would be in your best interest to seek the advice of an attorney who is experienced in family law matters.

Allan R. Manka is a Bexar County attorney who has been handling all types of family law matters for almost 40 years. Put his experience on your side when you are negotiating a distribution of the assets accumulated during your marriage relationship.

He has handled cases in all counties surrounding San Antonio, into South Texas and throughout the state. He is also extremely proud to have represented servicemen and servicewomen serving our country at Lackland and Randolph Air Force Bases.

Contact us for a confidential, no obligation consultation to discuss your situation and the options available to you.